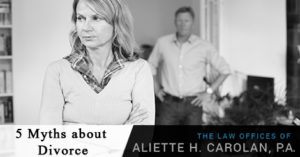 If you are thinking about divorce, you may have discussed it with friends, family members, or even a co-worker. For better or for worse, many people have strong opinions about divorce and the divorce process. In some cases, their feelings are shaped by their own divorce experience.

In other situations, their parents’ divorce had a strong impact on them as a child. Most people mean well, but unless they have in-depth knowledge about Florida family law, they may give you inaccurate advice. Today, the internet helps fuel many misconceptions and outright false information about divorce.

Before you begin your divorce, discuss your case and your concerns with an experienced Miami divorce lawyer. Getting the facts straight from your attorney is the best way to put your mind at ease and help you look forward to beginning a new life once your divorce is final.

Myth: Half of All Marriages End in Divorce 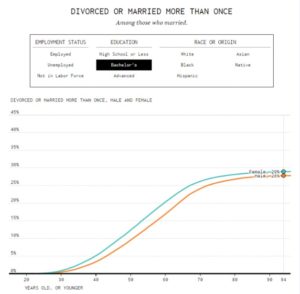 There is a prevailing idea that half of all marriages are doomed to fail. In reality, the divorce rate has historically fluctuated over time. In fact, divorce rates have fallen consistently since the 1970s and 1980s.

Divorce rates also vary depending on whether you are looking strictly at first-time marriages or people who have been married two, three, or more times. According to recent analyses, about one-third of marriages in the United States end in divorce.

Myth: You Should Stay Together for the Kids

Many parents worry that their divorce will harm their children emotionally. They may even feel pressure from family members or others to stay together for their children’s benefit, or at least until the kids are older.

This can lead people to remain in unhappy relationships, which can make everyone miserable — including children, who are generally much more attuned to their parents’ emotions than adults give them credit for.

In fact, a 2002 study by a psychologist at the University of Virginia revealed that children of divorce fared just as well later in life as children from households with married parents.

The study also showed that children from households with high levels of parental conflict had difficulties adjusting down the road.

Over the past two decades, states across the country have moved toward a parenting model that favors a child having as much contact as possible with both children.

Myth: I Can Prevent My Ex from Seeing Our Child If They Stop Paying Child Support

Not only is this untrue, it can land you in significant legal hot water if you attempt it. When it comes to a parent’s right to see his or her child pursuant to a time-sharing agreement or court order, the courts in Florida treat child support as an entirely separate matter.

Myth: I Can’t Get a Divorce If My Spouse Refuses to Sign the Divorce Papers

Under Florida law, no one is forced to remain in a marriage just because their spouse won’t cooperate with the divorce process. If your spouse refuses to acknowledge the divorce, or fails to appear at scheduled hearings, you will most likely have to proceed with a contested divorce, which might take longer than an uncontested divorce.

In this situation, the judge will likely grant a default judgment, which ends your divorce regardless of whether your spouse agrees to it.

When you’re ready to end your marriage, it’s helpful to reach out for support and help from loved ones and important people in your life. When it comes to legal advice, however, you should always discuss your case with your Miami divorce lawyer.