Alimony in Florida: In the News 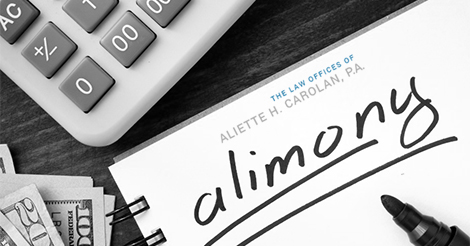 Florida is one of the few states that continues to have what is known as permanent alimony, which requires one spouse to pay alimony for the remainder of their spouse’s life after divorce.

This law is largely viewed to be outdated, and the Legislature for the state of Florida has attempted to reform the law for each of the past four years, with no success.

The Legislature put the bill up to a vote at the House in February, which is where the process began. If you’re using a Florida divorce attorney when going through a divorce, permanent alimony should be discussed.

When the same bill was brought to the house two years prior, Florida Governor Rick Scott vetoed the bill, due to the fact that it would have been applied retroactively.

This means that anyone currently paying permanent alimony would no longer be required to. Scott had worries that this would damage the economy. Last year, the bill was put up for vote by the Legislature once again.

This time, the clause that ensured the bill would apply retroactively was taken out, which initially made the bill appear to be more palatable to opponents and supporters of reform alike.

Also Read : How to Understand Alimony in Florida

However, an additional requirement was added to the bill that stated that judges should consider equal sharing of time with children to be the best outcome for couples that are divorcing.

This created a large amount of dissent. Ultimately, the bill didn’t make it to the Senate for a vote.

The clause remained in the bill for 2016, but has not received as much complaints. Some supporters of reform believe that alimony should typically end once children leave for college.

However, opponents believe that older women that decide to have kids will be stuck with numerous issues if a divorce occurs, and permanent alimony is not provided.

Many that work as a Florida divorce attorney simply want the law to be more precise and clear. For instance, a couple that is married for many years would require 15 or 20 years of alimony, while a shorter marriage of a few years wouldn’t include alimony at all after the divorce. These attorneys believe that it will be easier to know what to expect from a judge with more detailed laws.

The bill that was put up this year by the Florida Legislature had clear cut rules. Payments would follow a strict formula, which basically boiled down to multiplying the number of years married by .015.

This number would then be multiplied by the difference of gross income for the couple in question. The initial multiplier can rise up to .02 depending on how many years a couple was married before divorce.

This allows the judge to use their own discretion for what they feel the payment should be. Despite these strict guidelines, there are several exceptions that made it into the bill.

For instance, if the receiver of the alimony ever obtained a ten percent increase in the amount of income they take home, the payer could then request modifications to be made to the alimony they owe.

While the alimony bill, titled SB 668, passed both the House and Senate, by vote counts of 74-38 and 24-14 respectively, the Family Law Section of the Florida Bar Association actually withdrew their support of the bill around one month after it was introduced, in the middle of March.

They took away their support despite the fact that they helped to write it. Upon their withdrawal, they called for Governor Rick Scott to veto the bill as well once it reached his desk.

Since its introduction, the bill was becoming more and more contentious, due to huge debates on social media and among committees in the Legislature.

The reasons for these debates primarily have to do with the very basics of paying alimony permanently or temporarily, but much of it is also due to the additional provisions placed in the bill.

There was a last minute addition to the bill that made changes to the amount of alimony owed following a divorce after at least 20 years of marriage.

Because of this, the amount of alimony owed became more inconsistent. Many opponents of the bill aren’t 100 percent opposed to reform in all aspects, but simply want it to be fairer to all parties involved.

Nearly one month later, the bill finally reached the desk of Governor Rick Scott. He immediately vetoed the bill, leaving the Legislature to try again next year.

While Scott vetoed the bill two years prior due to the inclusion of a clause that ensured the bill applied retroactively, he vetoed the current one because of the provision that stated that the judge should strongly consider 50-50 sharing time for any children following a divorce.

Scott specifically stated that the “interests of the children” should be considered above all with a child-sharing arrangement. He stated in his veto letter that each family situation is unique, and should be taken into account when deciding such important matters.

That specific provision was largely backed by Tom Lee, R-Brandon, a Senate Appropriations Chairman. Several people in the Senate agreed to back the bill once the provision was put in.

Due to the conclusion of this bill being a veto by Rick Scott, the Legislature will attempt to revise the bill once again, in order to reach a point where both the House and Senate will approve the bill, as well as Scott.

Proponents of the bill in question still strongly believe that change and reform is necessary with alimony. Since the bill was vetoed, the law will remain the same until the Governor signs it into law, if that ever happens.