In an effort to speed up the dissolution of their marriage and preserve a sense of amicability, Brad Pitt and Angelina Jolie have decided to seal their court documents. They also plan to hire a private judge. Even if you aren’t a huge fan of these A-list stars, there is some value offered if you follow Brangelina’s lead. 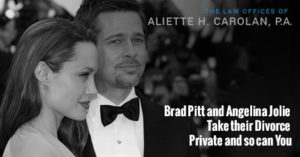 In the realm of Hollywood, the act of sealing the divorce documents helps to protect all the details of the split from any prying eyes. For these two stars, it is a real no-brainer, given the large amount of curiosity about their personal life and high profile status.

In the “real world” however, most people don’t really care how a divorced couple divvies up their wedding china or the details of their custody agreement. The average Joe isn’t going to have many people trying to find out all the details. Also, sealing the documents for privacy purposes is a burden on the court, which means it is a process that is going to cost more in the long run. One way around this is for couples to use initials, rather than their full names, on the court documents.

However, in some cases of divorce, it is more of a common request that divorce documents are sealed. In fact, for many, it is a matter of principle. If you are interested in this type of divorce, the best thing you can do is to hire an experienced Miami divorce attorney. They can help you know how to move forward with a private divorce.

Why are Private Divorces Gaining in Popularity?

In some cases, when couples split, there are a host of issues that have to be dealt with, including credit cards, taxes, investments, student loans, real estate, retirement accounts, child support, alimony and more.

They may also be allegations of child abuse, sexual harassment or even cheating. For example, in the Jolie and Pitt case, there were allegations that Pitt was abusive toward his 15-year-old son while on a private flight.

The Cost of Private Divorces

For the average person, a private judge can cost between $400 and $900; however, it is likely that Pitt and Jolie are paying between $1000 and #1500 just to have the case expedited even more.

You also have to factor in the cost of legal representation for each party.

If you like the idea of a private divorce, but don’t have the funds to facilitate it, there are other options. For example, you can opt for a collaborative divorce where you agree to remain out of court, or mediation.

Know: How Mediation Can Save You Time and Money in Your Divorce

Even though the initial costs of a private divorce may seem high, due to how fast the process typically goes, it is often less expensive than having to go through a divorce trial. The bottom line is to try and stay out of court, if possible. This can help eliminate many of the costs associated with getting a divorce.

To learn more about a private divorce, and if it is the right option for you, contact us today.

Also Read: There a Golden Couple in Today’s Society? Study Says Not