Can I Move Out of the State of Florida in the Middle of a Divorce?

Divorce can often involve many difficult choices as well as life-changing scenarios. One of those might mean moving out of state. In order to qualify for divorce in the state of Florida, both parties must be Florida residents for a specified amount of time. But are you allowed to move out of state while you are in the middle of a divorce?

Prior to the granting of a divorce in the state of Florida, the court has jurisdiction over the two parties involved in the divorce proceedings. With the proper jurisdiction, the courts can decide the issues involved between the parties. 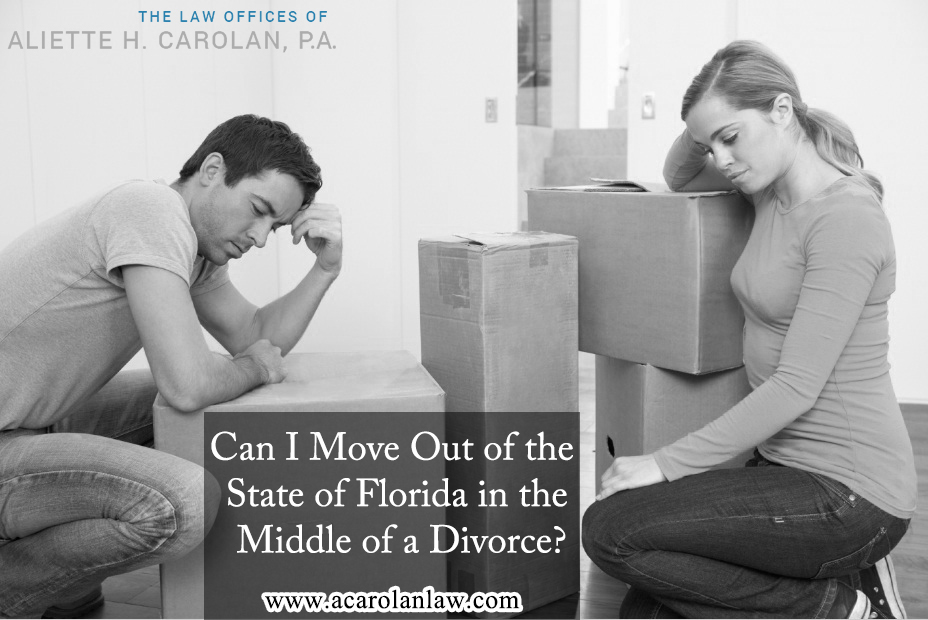 What Does Established Jurisdiction Mean?

When one party is served a copy of the divorce complaint or petition, the state of Florida has jurisdiction over the other party as well. When there is an established jurisdiction, then there are certain stipulations for either party.

However, when there are children involved, there are certain exceptions. In the state of Florida, the parent who has custody of a child can only move fifty miles with the child for no longer than two months if the noncustodial parent is notified.

Be aware…If the other parent agrees to the relocation, then the custodial parent has to inform the court by filing a written agreement. In a situation where the parents disagree, the court has to decide on whether to permit the move by holding a hearing.

It’s All About the Children…

In the state of Florida as well as other states, there is no tolerance for a parent that moves children out of state, away from the other parent. In fact, once you file a divorce petition and establish residency, you also give the court the jurisdiction over the children.

The laws are very strict when it comes to taking children away from the other parent while there is divorce litigation in progress. If the court thinks that the move will negatively impact the child or the child’s relationship with the noncustodial parent, the court may not allow the move.

Be aware… If there are children involved, and the divorce is already filed, then you must speak to an divorce attorney before making a decision to leave the state…

For this reason, when the petition is filed, you must request permission from the court to leave the state with your children in tow.

For example, you cannot live in the state of Florida for six months, go to California for another six months and come back to Florida to finalize your divorce. Until the divorce has been finalized, the state will maintain jurisdiction over everyone involved. It is wise not to leave the state with your children without talking to a lawyer.

What are the Requirements for Residency?

When someone files a divorce complaint or petition, the person has to meet the residency requirement for the state. Each state law is different when it comes to the precise time period. In the state of Florida, the requirement for residency is six months.

Be aware… Once you file and have lived continuously in the state for six months or more, then the requirements for jurisdiction have been satisfied and you can leave, but if children are in the picture, it is a different story. You don’t have to live at the same address for six months as long as you reside within the state of Florida.

If you have a no-contest divorce, which doesn’t take long to be finalized, then it is probably better to wait before leaving the state. Most divorces will generally require an appearance in court. You may have to go through a mediation process with your spouse to resolve certain issues.

Be aware that…If you leave the state, you may have to travel back and forth to make those court appearances. This can get quite expensive for you.

Prior to filing for a divorce, you have knowledge that you would like to relocate, try to solicit the help of an experienced attorney who will inform you of the divorce laws. It may be ideal to file the divorce after you relocate in a new jurisdiction, especially if you have children to consider.

Be aware…The children have to live in the new state for six months or your spouse can initiate a divorce proceeding or custody hearing in the previous state where you lived with your spouse.

Consult with a Divorce Attorney

If you are undecided about filing for a divorce because you are not sure about the residency requirements and jurisdiction, you should definitely consult with a divorce lawyer first.