How Do I Handle My Child’s Summer Vacation after Divorce? 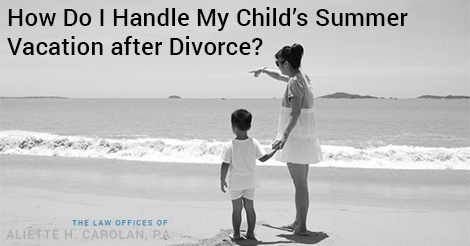 Now that summer has arrived, parents throughout Florida must find activities to keep their children occupied while school is out.

Child custody summer visitation can sometimes be problematic for divorced parents. How should you divide the time? What if one parent lives in another state?

This is why it’s a good idea to have a parenting plan that clearly outlines how the child will spend the summer months.

By having a written agreement in place, parents can avoid disputes that create stress and frustration.

If you have questions about your parenting plan, or you would like to create a plan in your case, a Miami child custody and timesharing lawyer can help.

One of the most important things to know about child custody laws in Florida is that Florida no longer uses the term “custody” to describe how divorced parents spend time with their children.

Instead, Florida law encourages both parents to share equally in the decisions surrounding their child. The law also prefers the child to have as much contact as possible with both parents.

There is no preference in the law for the mother – or the father, for that matter – to have primary control of the child.

Rather than a “custody agreement” or “custody plan”, divorcing parents in Florida create a Parenting Plan that includes a timesharing agreement.

This agreement should address issues such as health insurance, each parent’s responsibilities toward the child, provisions for child support, and a schedule for holidays and vacations.

Most children have several weeks off during the summer months. This long break is a good opportunity for kids to spend quality time with both parents.

In most cases, both moms and dads want to spend as much time as possible with their children.

If you and your ex-spouse are struggling to agree on an acceptable arrangement for summer visitation, there are several options available to you.

Whatever parents decide, they should consider their child’s wishes as much as possible. After a long school year, most kids need time to relax and unwind.

As children get older, they may want to participate in camps and activities, which could take up much of the summer. Children may also want to spend their time with friends over summer break.

Still can’t agree on a parenting plan in your case? Child custody mediation could be the answer.

Parenting is hard work. Handling a co-parent can be especially challenging. Read our tips for working with a difficult co-parent.

As a parent, you want what is best for your child. You can avoid a lot of headaches and disagreements with your ex-spouse by creating a reasonable summer timesharing agreement that allows both you and your ex to spend valuable time with your child.

To learn more about how parenting plans work in Florida, call a Miami child custody and timesharing lawyer today.