Ending a relationship when there are children involved can be very difficult. If the breakup is not amicable, it can affect the children in a negative way. Those negative effects can be enhanced even more if there is dispute over the child custody arrangement. 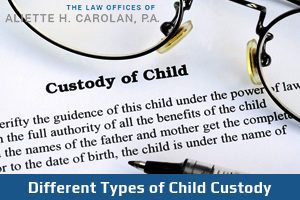 According to the U.S. Census Bureau, there are about 12 million families headed by single parents. Some 42% of all marriages end in divorce. Obviously not all of those result in a child custody agreement, but with numbers like that you begin to get an idea just how often breakups with children involved happen.

There are 4 types of child custody arrangements, each discussed below.

A parent who has sole legal and physical custody of a child has complete authority over and responsibility for that child. Under this arrangement, the other parent could still have visitation rights, but they would be limited and come with no legal authority over the decisions about the child’s long-term education, religious and health care issues.

As mentioned above, joint child custody arrangements are becoming more common. Unless something bars such an arrangement – like provable abuse or neglect from one parent – it is usually the best thing for the child. Joint legal custody gives each parent a say over their child’s long-term well-being; in the event of a dispute, things can be decided by a judge.

Under joint physical custody, both parents share the day-to-day aspects of raising their child, first with one parent, then the other. This time can be split up many ways, including each parent taking alternate weeks, alternate months or maybe even split up the time so that one parent has the child for school days and the other has the child for days they don’t go to school.

Other Things to Consider

No matter how custody is worked out, it’s important to remember that what must be done is what will be best for the child. Any problems one parent may have with the other must be kept in the background as much as possible. A stable, consistent environment for the child must be priority #1.

If you have questions about child custody issues in southern Florida, contact a family law attorney at The Carolan Family Law Firm, P.A. or call 305-358-2330 for a consultation today.

Tips for Talking to Your Spouse about Collaborative Divorce

Tips of Summertime and Shared Parenting