I Need a Divorce in Miami. How Long Do I Have to Wait? 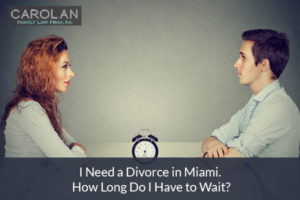 Dissolving a marriage is never an easy thing to do, even if both parties agree that a divorce is what’s best for the family. It’s in everyone’s best interest to finalize the divorce as fast as possible so everyone can move on with the next stage of their life.

Do I Need to Prove Fault for Divorce?

No, in Miami, you do not need to prove one spouse was at fault in the marriage to get a divorce. Both spouses just need to agree the marriage is irretrievably broken. Fault for the divorce could be used in the case of alimony, custody, child support and the division of property, however.

What Is the Quickest Way to Get a Divorce in Miami?

In the quickest cases, a Miami divorce could take approximately three weeks once the paperwork is filed. However, it will mostly like only happen this quickly if the divorce is uncontested. This means that every aspect of it – from the division of property to custody to alimony, etc. – will be agreed upon by both spouses. This doesn’t happen frequently, especially when children are part of the equation.

How Long Will My Divorce Take if It’s Contested?

In addition to the three-week waiting period after the divorce paperwork is filed, a Miami judge may also mandate couple’s therapy if both spouses aren’t in agreement that the marriage is irretrievably broken. A judge could also order financial discovery if assets or property are contested, or family therapy and/or parenting courses could be mandated as well if there is a custody battle.

Contested divorces in Miami can become very complicated and drawn out if the spouses are unable to come to agreement over all the aspects of the divorce by themselves or through mediation, as that would require a court hearing to make the final determinations.

Consult a Divorce Lawyer in Miami Who Will Fight for You

Completing a divorce in Miami can be a complex and complicated process, and you need someone on your side who will fight for you with your best interests in mind. Call the experts at Carolan Family Law Firm for a consultation at (305)-358-2330.