No More Wed-Lock for Same-Sex Couples in Florida

Marriage for any couple in our modern day and age involves the merging of lives in every way. A marriage involves joining together everything from credit cards to real estate. This is equally as true for same-sex marriage, which is now legal in the state of Florida. 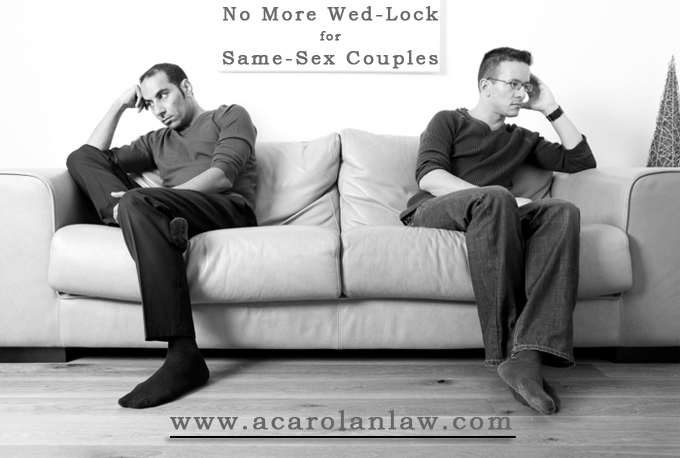 According to a recent article published by the Tampa Bay Times, the state of Florida now addressed same-sex divorces. The article states, “Until recently, same-sex couples were trapped in a legal limbo sometimes known in gay and lesbian circles as ‘wed-lock.’”

Until the past several years, it was presumed the divorce rate may actually be lower among same-sex couples than traditional couples. This was because many people believed the same-sex couples that took the plunge first were those who struggled with the inability to get married, and the emotional struggles and hardships together. It was not a surprise to see couples in domestic partnerships for more than 10 years get married once it became legal.

Now opinions differ concerning same-sex divorce. Andrew Gelman, a professor of statistics at Columbia University found, “Given the evidence available, the dissolution rate of same-sex marriages seems comparable to, not lower than, the divorce rate of traditional marriages.”

Although marriage equality groups regularly defend the idea of getting same-sex marriage legalized in every state, they rarely address the idea of same-sex divorce. As states change their laws, the rules for marriage also apply to the rules for divorce. For example, all divorces in the state of Florida must meet the residency minimum and live in Florida for at least six months. This only applies to one of the two partners involved in the divorce.

Every couple going through a divorce always endures some sort of difficulty with the split. When it comes to divorce in the same-sex community, New York Magazine reports on “the way divorce seems to prove, despite the statistics, old slurs about their relative inability to maintain stable bonds. On a larger scale, gay divorce may be used to undermine arguments for gay marriage in the first place.” This is an unfair burden to put on one couple, going through the own individual struggle and dissolution of their marriage.

At the Law Offices of Aliette H. Carolan, PA, we truly care about every client. No matter the circumstances of your divorce, your burden is to ensure the best for your own life. We specialize in same-sex divorce and strive to make your divorce as painless as possible while still representing your interests.

If you need a divorce attorney in Miami, our attorneys are available to help you navigate the process. Visit our site today or contact us by phone at (305) 358-2330 to set up a consultation.