What are the Rights of an Unemployed Wife in a Divorce? 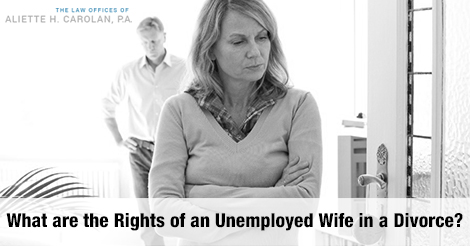 Divorces are never easy for either of the spouse. It’s a hard time since a lifetime of commitment is being torn apart. However, unemployed wives are the most vulnerable among the two during this hard time owing to the fact that they have been depending on their spouse for support.

State laws ensure that even if they are unemployed for the duration of the marriage, they still have rights to marital property during a divorce.

Individual state laws vary but whether or not an unemployed wife is awarded financial support rests in the hands of the judge presiding over the divorce case. The rights unemployed women have during a divorce depend on a number of things.

When dividing property, the court considers a number of things include the agreements between the spouses, each spouse’s overall economic circumstances among others. With such a provision, an unemployed woman is not at risk of remaining broke after the divorce.

Length of the Relationship

The longer a relationship has been, the more contributions one has made to a marriage. Because even though an unemployed woman does not make monetary contributions into the marriage, they stayed at home and cooked for the family, took care of the children and support their spouse’s career.

All these count as contributions. In Florida, an unemployed wife can get a good amount of financial support if the marriage was longer than 17 years.

Also Read : Will I Get Spousal Support in My Divorce?

Receiving financial support from an ex-spouse depends on why a woman is unemployed in the first place. If they never worked before and lack any job skills, a judge in a divorce in Florida may order spousal support.

However, if the woman in question earned a college degree and voluntarily chose not to work, the court can send for a vocational assessment to find out their employable skills and what they would be expected to earn were they to work. This assessment would guide the judge’s decision regarding payment post-divorce.

This is a requirement for both parents, married or otherwise. Divorce in Florida follows the income shares model of child support calculation which considers the noncustodial parent’s income.

In the case of a divorce, when an unemployed wife gets custody of any minor children, they would receive child support payments. These payments are meant to take care of the of the children’s shelter, clothing and medical care.

As the divorce proceedings are still in court, state laws preserve a couple’s financial status quo. Therefore, the judge rarely forces an unemployed woman to find employment while the divorce case is still pending.

This is because the earning spouse must continue paying bills so that the collateral belonging to the marital estate is not lost. The judge may order a temporary spousal support during the divorce time too so that the unemployed wife can take care of their personal necessary expenses.

For a young unemployed wife, the judge may order a temporary support to extend a few years after the divorce. Commonly known as rehabilitative support, this payment is meant to provide the divorced wife with an income long enough to allow them to go back to school or develop skills they can use to get a job and earn their own living.

Rehabilitative financial support is also given to women with skills but who did not have to work due to their husband’s income so as to support them during the time they try to find a job in their field of specialization.

For older women who have been in a marriage for over ten years, they may be awarded a long-term alimony or better known as by the judge.

This alimony lasts until the woman dies or is remarried. For a woman who has dedicated her whole life in raising children and has gotten to an age where she is not expected to go back to school or learn new skills to get a new job.

Get a Good Divorce Lawyers Miami

Don’t go through this alone an experienced Divorce Lawyers Miami can help. The Carolan Family Law Firm, P.A. have the experience to get you what you need now and after your divorce is complete.