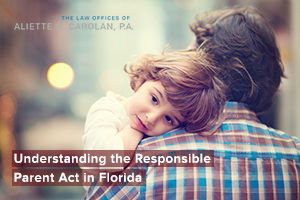 If the court orders a parent to pay child support, the parent is then bound by the legal agreement to do that. If they fail to meet this agreement, it may result in a charge of contempt of court, or even criminal or civil penalties.

If you are paying child support or are thinking about filing for divorce and may have to pay child support in the future, then you need to be aware of the family law policies in Florida. These are laws that are changing constantly and they can affect your future and finances.

Learning about the proposed change to Florida family law and the Responsible Parent Act can help you better understand what you are obligated to pay.

What Changes with the Responsible Parent Act?

In January 2017, Kim Daniels filed House Bill 313, which is also known as the Florida Responsible Parent Act. Generally speaking, the bill lifts some of the consequences and penalties for parents who are unable to make their child support payments.

According to the existing law, if a parent doesn’t make the payments they have been ordered to for child support, they may have their motor vehicle registration or driver’s license taken away by the court. If House Bill 313 is approved, it will eliminate the ability of the court to suspend registration and licenses for some parents who are unable to make the payments.

However, this bill is not going to let all parents off of the hook. If the bill is successful, parents who are financially stable will not be able to skip a payment without facing certain repercussions. The bill is only going to lift penalties for the parents who are unable to pay child support because of:

If a parent wants to avoid punishment, the new law would give them the right to opt for supervised home confinement or be put in a work-release program. Also, any business that hires the parent as part of the work release program is going to receive a tax credit.

The Responsible Parent Act has not Yet been Signed into Law

Keep in mind, House Bill 313 was not introduced until the early part of January, which means that it may be some time before any movement is made regarding the bill actually becoming a law. If a parent is struggling to make a child support payments, then they should not rely on this bill when they are planning their finances.

Currently, the suspension of a person’s driver’s license and registration is only one of the consequences of not paying child support. Some of the other penalties of this include jail time, seizure of any income tax return, seizure of bank accounts and the requirement to pay restitution or fines.

If you are struggling to pay child support or want to know what your options are, contact the family law attorneys at The Law Offices of Aliette H. Carolan, P.A. by calling 305-358-2330.