What Happens If I Have Credit Card Debt in My Divorce?

If you are contemplating divorce, finances are likely to be one of the most important issues on your mind. Many couples have credit cards. In a divorce situation, determining which spouse is responsible for debt depends largely on when the debt was incurred. 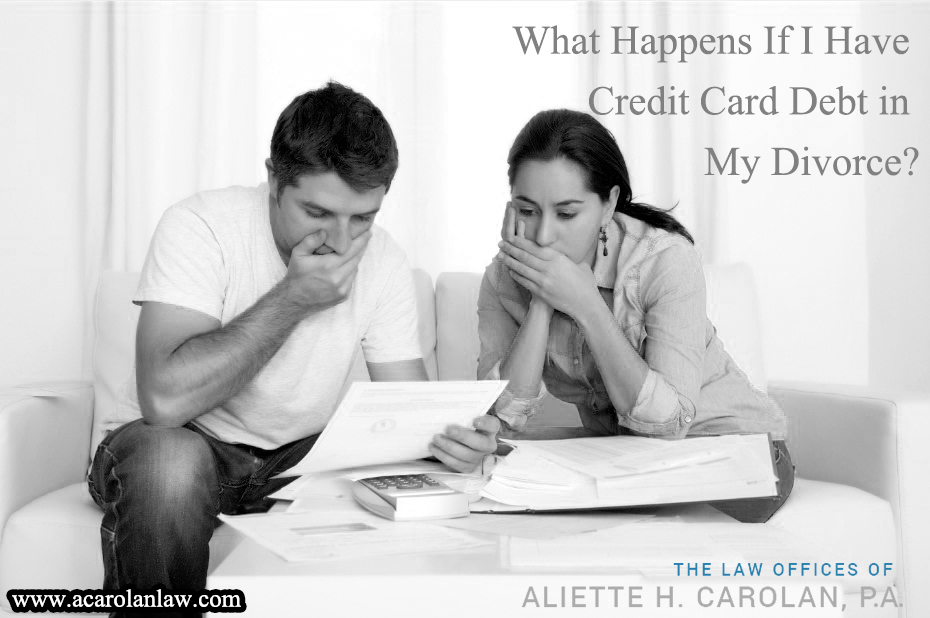 Florida Is an Equitable Distribution State

The first step in deciding who must pay the credit card debt is determining whether the debt is “marital” or “separate“. Like the majority of states, Florida is an “equitable distribution” state, which means that marital debts – as well as marital assets – are divided as fairly and equitably as possible.

Although this may not always necessarily mean that debts are divided equally, Florida law permits courts to consider a number of factors when dividing debt between the spouses.

Absent a written marital agreement, also known as a prenuptial agreement, Florida law generally assumes that all debt acquired during the marriage is “”. Assets and debts acquired prior to the marriage or through an inheritance are typically “separate” property, which means the owner spouse has a sole claim or obligation to the property or debt.

In the case of both marital debt and marital property, title is not necessarily important when it comes to determining which spouse owns the property or is responsible for the debt. For example, the couple’s home may be titled in just one spouse’s name, but this does not mean the other spouse is not entitled to an equity interest in the house.

The same is true with credit cards. Just because a credit card is in one spouse’s name does not mean the other spouse has no obligation to pay the balance or a portion of the balance.

What Happens If You Were Not Aware of the Debt?

In many cases, a spouse was completely unaware the other person was running up a high credit card bill. In these situations, the court is very unlikely to decide that a lack of knowledge absolves the person from any responsibility for the debt.

Fortunately, it may be possible to use detailed financial records and other evidence to show that a spouse concealed a credit card from the other person or used it in an inappropriate way, such as charging gifts for a third party or purchasing an apartment or household items in preparation for the divorce.

The court will also consider when the debt was charged to the credit card and for what purpose. Furthermore, the court may adjust a spouse’s alimony obligation based on the total debt the spouse will incur in the divorce.

In Green v. Green, a 2012 case out of the Fourth District Court of Appeal, the court held that the husband’s permanent alimony obligation was too high in light of the fact he had also been ordered to pay the parties’ $30,000 credit card debt. The court stated: “Based upon the record, the trial court distributed the $30,000 marital debt unequally without considering the permanent periodic alimony that Former Husband would be responsible to pay…”

Consult with an Experienced Divorce Attorney

All in all, if you are thinking about divorce or are in the process of one—especially one that involves credit card debt—then you may want to consider working with an experienced divorce attorney to ensure that your rights are protected.