Why You Need a Same-Sex Divorce Attorney

Not many couples marry with the assumption that they are going to divorce. Divorce is difficult no matter who you are or your sexual orientation. But for a homosexual couple? Divorce can be a nightmare. Why? There are so many contradictions to the laws for homosexual couples. 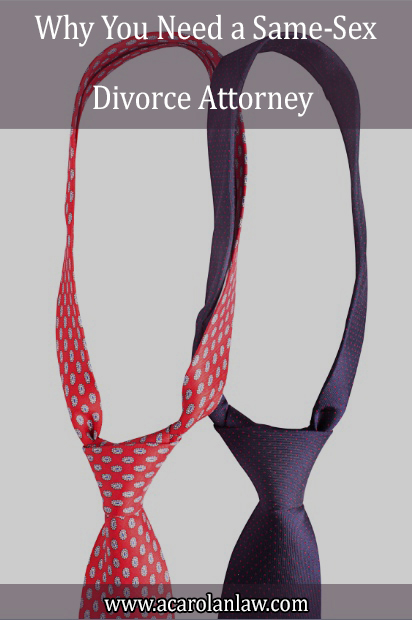 In the most recent years, advocacy groups have worked hard on the marriage-equality issues. Some have seen several victories while others are still fighting to be heard. It appears to be an obvious choice that anyone who has legal rights to marry should have the same rights to divorce. However, that legal right is not always extended to same-sex marriage or divorce.

Be aware…This renders an essentially imperfect legal system that could ultimately take a long time to catch up with the rights of heterosexual unions. With the help of a same-sex divorce attorney, you may be closer to it than the expected norm.

Although divorce is not a romantic process, it is one of the most significant events that constitute the right of a civil marriage. Comparing it to the public argument on the legal ins and outs of gay marriage, the discussion is nowhere near the unraveling of gay divorce. One of the possible reasons is that each gay marriage is adjudicated in a different way in each state.

Be aware…There are many complications that could arise, especially in how issues such as pensions, alimony, and inheritance are approached. A good same-sex attorney understands the dynamics and has the experienced and legal knowledge to seek what is in the best interest of the client.

In a heterosexual divorce, the judge determines child support and visitation rights of the couples involved, but it is entirely based on what is in a child’s best interests. For gay couples, that same issue is more complex, especially if only one of the gay couple is the adoptive parent.

If you were to sign a prenuptial agreement before marriage, then the divorce settlement issues would be less of a hassle. It is best to take advantage of this as many gay couples are doing these days. However, even with a prenuptial agreement, you can have other issues to deal with, especially when there are children involved.

Back to basics…So, here we go again – you need an experienced same-sex attorney on your side.

In addition to the list of legal complexities that gay couples have to endure, another thing that worsens the divorce process is the reinforcement of the conservative viewpoint about the inability for gay couples to maintain a steady relationship. Many gay couples make a concerted effort to model the heterosexual relationship, but are still judged when they have to split up. Early divorce will oftentimes leave them with a sense of guilt at the “I told you so.”

There are many more states that don’t condone same-sex marriage compared to the ones that do. In those states that have legalized it, the burdensome requirements imposed upon same-sex divorce are mind boggling. A same-sex attorney can wade through the legalities and defend your divorce case.

No one wants to be in a divorce – whether gay or straight. For the same-sex couples, it can be a headache. For a smoother legal process, it is best to speak to an attorney, especially for a contested dissolution.